Strongly correlated electron systems show the arguably most fascinating and at the same time the least understood physical phenomena in solid state physics, such as high-temperature superconductivity as in the cuprates, the Mott metal-insulator transition in V

, or the physics of quantum critical points in heavy fermion compounds. Unfortunately, from the theoretical perspective, these systems elude any ab initio description by density functional theory due to the intrinsic mean-field nature of the latter approach. This calls for the development of advanced quantum field theory (QFT) many-body methods capable of treating electronic correlations non-perturbatively, which represents one of the central research areas of our group.

The most basic model, in some sense the “Drosophila” of correlated lattice electrons, is the Hubbard model (see Fig. 1), described by the following Hamiltonian:

, while the second term (potential energy) accounts for the strong Coulomb repulsion

between two electrons at the same lattice site, which is responsible for the correlations in the system. The Green's functions are the essential objects for a QFT description of a correlated system since they are experimentally accessible. However, despite the apparent simplicity of Hamiltonian (1), the Green's function for the Hubbard model cannot be calculated exactly. Hence, the development of approximations, adopting advanced techniques of QFT, is at the frontier of research in theoretical solid state physics. 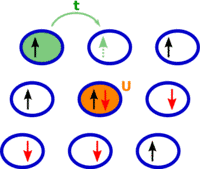 Over the last twenty years DMFT has emerged as the standard tool for calculating the Green’s functions of strongly correlated systems, described by the Hubbard Hamiltonian (1) and related models. Within DMFT, the actual lattice problem is replaced by only one interacting lattice site, which hybridizes with a self-consistently determined non-interacting bath (see Fig. 2).

This way one includes local correlation effects non-perturbatively but neglects nonlocal spatial correlations. In this respect, DMFT works quite well for systems with a large number of neighboring sites (high coordination number) or at high temperatures. However, it fails to capture the correct physics in situations where nonlocal correlations become crucial. This is the case, e.g., for systems in the vicinity of a second-order phase transition, where one observes fluctuations on all length scales and a diverging correlation length. For an appropriate description of this important class of phase transitions one has to include nonlocal correlation effects on all length scales on top of the local ones of DMFT. This can be achieved by (Feynman) diagrammatic extensions of DMFT. Their basic idea is to construct nonlocal Feynman diagrams for the (irreducible) Green’s functions with the nonlocal DMFT Green’s function

and the local DMFT

It turns out that the description of second-order phase transitions requires an infinite (ladder) resummation of such diagrams. In order to perform such resummations in a systematic way, different methods are currently under consideration in our group:

In order to go beyond the model level and describe real correlated materials, it is necessary to combine the above-mentioned approaches with ab initio methods (e.g., LDA). In this respect, the understanding of unconventional superconductivity, quantum criticality or weak localization (on the model level) as well as the application of D

A to real materials are the aim of the ERC project AbinitioD?A. Ab initio D

A includes the full Coulomb interaction

instead of the Hubbard

as lowest-order contribution to the fully irreducible vertex

, this way allowing for the description of local and nonlocal correlation effects in real materials.