Strongly correlated electron systems show some of the most intriguing and least understood phenomena of solid state physics, including high temperature superconductivity and quantum criticality. We develop new quantum field theoretical and computational methods for a better qualitative understanding and quantitative description of strongly correlated electron systems. Application-wise, our focus is on transition metal oxides and f-electron systems, both as bulk materials and heterostructures. Our research often tries to explain unusual experimental results, in other cases our insight as well as serendipity lead to the discovery of new physical phenomena or applications. In the following, four exemplary cases are highlighted.

A physical phenomena, we actually discovered by serendipity analyzing LDA+DMFT results for SrVO

[1], are kinks in strongly correlated electron systems. Even absent any external bosonic degrees of freedom such as phonons or antiferromagnetic spin-fluctuations, there is a kink in the dispersion relation of strongly correlated materials. This could be explained mathematically [2] as necessitating from a three peak structure with a quasiparticle peak separated from the lower and upper Hubbard bands. More recently [3] we were able to pin-point the physical origin of the kink: the kink energy scale is nothing but the Kondo temperature, which for a lattice model such as the Hubbard model (transition metal oxides or f-electron systems) is different from the width of the quasiparticle peak. 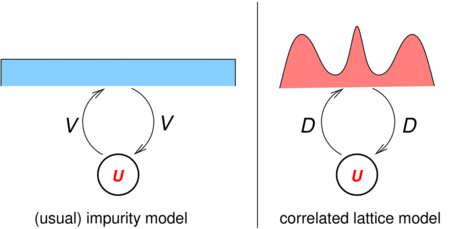 to an uncorrelated and wide conduction electron band. In this case, the width of the central peak and the Kondo temperature are the same. Right: Hubbard model situation, where an electron leaving a correlated site moves within the strongly correlated and narrow band. In this situation, the effective Kondo energy scale is smaller than the width of the narrow band. There is a kink at the Kondo energy scale.

[4]. Together with our experimental colleagues, we were recently able to shed new light [5,6] on this famous transition. In particular, the old paradigm of a doping-pressure equivalence does not hold, and there is a microscale phase separation for Cr-doped V 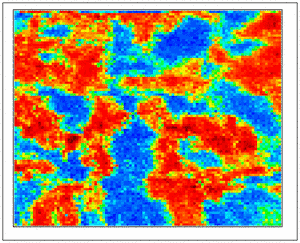 The metallic phase of Cr-doped V

is actually a mixture of metallic (red) and insulating (blue) islands, phase-separated on the microscale [6].

A fascinating source of green energy is the transformation of heat (gradients) into electric energy through the Seebeck effect. Our quest in this research field is the design of new materials with a higher thermoelectric figure of merit. This is needed for a higher efficiency and wide scale technological application. We are studying various materials such as FeSb

, with the aim of understanding the microscopic origin of why the thermopower in some materials is particularly high and how one can further optimize it. 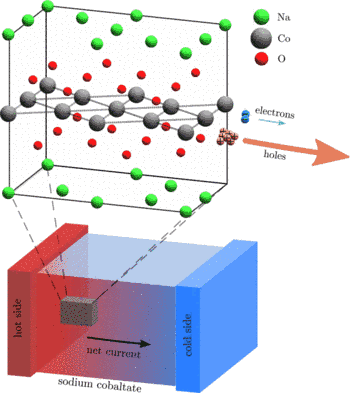 If we apply a heat gradient, electrons and holes alike are diffusing from the hot to the cold side resulting typically in a very small net current. For a good thermoelectric, we need however a large net current, i.e. a huge asymmetry between electron and hole diffusion. Due to the pudding-mold bandstructure in Na

, the group velocity of the holes is already considerably larger than that of the electrons, as indicated by the larger orange arrow. Electronic correlations additionally shift electrons away from the Fermi level, as visualized by the fewer blue electrons and the narrower width of the blue arrow. As both effects add up, the electron current is much smaller than the hole current leading to the net current displayed, and hence to the good thermoelectric properties of Na

prototype, have only lightly doped d-bands, and are hence not strongly correlated. In such a case, a density functional theory description and even a tight-binding modelling [8] is sufficient. We have developed a theory for spin-orbit coupling in oxide heterostructures, which allows us to explain why the spin splitting can be particularly strong and angle dependent in oxide heterostructures [9]. In other cases, the number of d-electrons on the Vanadium sites is substantial, and electronic correlations are strong. For example, a few SrVO

layers on a substrate such as SrTiO

are Mott insulating whereas bulk SrVO

is a (strongly correlated) metal. This can be even used to build a Mott transistor, where an electric field triggers a metal-insulator transition [10]. The alternating atomic layers of oxide heterostructures often lead to a polar surface and we have proposed to exploit this polar surface along with the conducting interface layer and the large optical absorption in LaVO 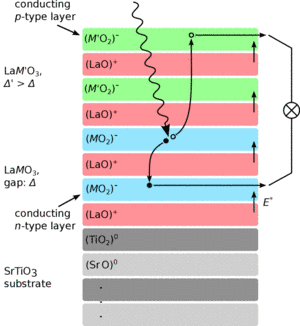 Schematic of an oxide heterostructure solar cell. Phonons are absorbed in the LaMO

absorber material. The polar electric field separates the created electrons and holes: the electrons are accelerated to the conducting interface and the holes to the surface. Exploiting the flexibility of oxide heterostructures to grow materials with different gaps, here LaMO