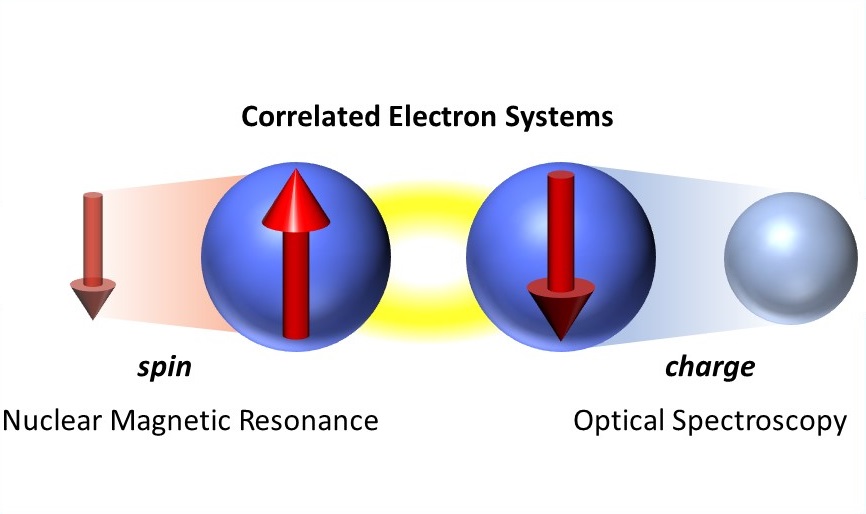 While in common metals and semiconductors the conduction electrons move rather freely, solids subject to strong electron-electron interactions exhibit qualitatively different behavior. In particular narrow-band materials with a reduced kinetic energy are prone to correlation effects arising from mutual repulsion among the conduction electrons, which range from pronounced renormalization of the effective mass to complete localization of charge carriers in an insulating state. Such metal-insulator transitions go along with exotic phenomena like unconventional superconductivity and various forms of magnetism.
Our focus is on circumstantial investigation of the charge and spin degrees of freedom in correlated electron systems using complementary spectroscopic techniques. While broadband charge excitations and lattice vibrations are probed by optical spectroscopy, which is particularly susceptible to metal-insulator transitions, nuclear magnetic resonance (NMR) is a powerful tool to study the spin properties that are relevant to Cooper pairing and all sorts of magnetic states. Interactions will be tuned by various types of chemical and physical pressure.

While phonon-driven superconductivity in elements like mercury or lead is well understood in terms of the BCS theory, unconventional superconductivity in materials subject to strong electronic correlations remains puzzling since its discovery more than 40 years ago. The phenomenon is commonly observed nearby phase transitions and critical points at low temperatures. The mutual Coulomb repulsion U among conduction electrons can arrest their motion in materials with a half-filled band, causing a complete breakdown of metallic behavior. The emerging insulating state is termed a Mott insulator, after Nobel Prize laureate Sir Nevill Mott. Here we investigate organic compounds that exhibit Mott physics at temperatures of a few 100 K, easily accessible in cryogenic experiments using liquid helium. Note, this provides unprecedented insight into correlated quantum states which would require temperatures of several 1000 K or even 10000 K in transition-metal oxides, such as vanadium oxide or the high-Tc cuprates. Charge localization in Mott insulators naturally involves antiferromagnetic interactions through the itinerant exchange mechanism: The quantum nature of electrons yields virtual hopping processes between neighboring sites, proportional to the transfer integral t. This requires antiparallel alignment of two spins while they - virtually - reside on the same atomic site according to Pauli principle, resulting in an antiferromagnetic exchange interaction J~t2/U.
Typically, this leads to antiferromagnetic order below the Neel temperature TN, which is comparable to J/kB. However, geometrical frustration arising from a triangular arrangement of the spins may prevent long-range magnetic order down to zero temperature even in presence of strong exchange interactions (of order 100 K). It was suggested that this can give rise to an exotic state where coherent spin excitations propagate freely through the Mott insulator while the electronic charge is fully frozen to the lattice sites. Analogue to a Fermi liquid in a conventional metal, the associated fermionic state was termed 'quantum spin liquid'. Yet, the story is not that simple, because other types of phase transitions, for instance involving the crystal lattice coupled to the magnetic degrees of freedom, can interfere with the proposed itinerant spin state. We perform cutting-edge research using NMR as an ideally suited local probe to study quantum spin liquid candidates. Back in the 1950's, Landau postulated that conduction electrons in solids can be described as quasiparticles with charge e and spin 1/2, where all interactions (electron-electron, electron-lattice) are included in the renormalized mass m*. While in common metals, like copper, silver or gold, the effective mass is comparable to the bare electron mass me, correlated electron systems typically exhibit stronlgy enhanced values up to m* ~ 1000 me in heavy fermion systems.
Apart from a mass renormalization, deviations from Landau's quasiparticle concept are observed in dc resistivity measurements nearby electronic instabilities, for instance when approaching a Mott insulator. In various correlated systems, a strange metallic state with linear-in-T resistivity is found down to low temperatures, which seemingly contradicts the T2 dependence expected from Fermi-liquid theory. Moreover, in bad metals the absolute value of resistivity sometimes exceeds the Ioffe-Regel-Mott limit that corresponds to one scattering event per lattice site as an upper bound of coherent metallic transport.
The major question arising is whether these apparent deviations from Landau's quasiparticle framework arise from entirely different metallic states, or whether the existing theory just requires extensions. Optical spectroscopy truly excels the capabilities of dc transport as it measures the full frequency dependence of the conductivity, providing invaluable insight into the electrodynamics of charge transport. Our latest results lend support to the second scenario, indicating that metallic transport does emerge from Landau's quasiparticles. Through our ongoing efforts involving both optical and NMR experiments, we want to disclose the mechanisms that conceal the Fermi liquid at low frequencies and in the dc resistivity.